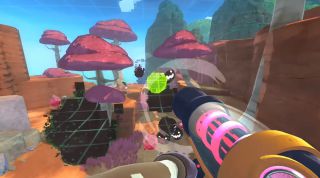 Hunt down goo in cyberspace.

Slime Rancher, Monomi Park’s cheery FPS, will now let you do important work for science in a new update. Viktor’s Experimental Update will send you into a simulated world to hunt down virtual, glitchy slimes. And if doing it in the name of science isn’t enough, there are also some new gadgets that will be doled out as rewards.

The titular scientist has created a simulated version of Slime Rancher’s world, but it’s full of bugs and glitchy slimes, and conveniently catching these slimes is a lot like catching slimes in the real world, which you do for a living. What are the chances? Collecting them generates bug reports, which will net you flashy hi-tech gadgets, like a chicken cloner and drones that help you do your chores.

Once you’ve unlocked the Ruins area and completed a few tasks, Viktor will invite you to his workshop and let you hop into the ‘slimeulation’. Using Viktor’s debug spray, you’ll be able to reveal the slimes hiding in the simulation, suck them up and turn them into bug reports. You’ll have limited time, though, as the simulation will start to become corrupted, forcing you to flee through an exit portal.

Here are the rewards you can get for capturing glitchy slimes.

Alongside the free update, there’s also some DLC. The Secret Style Pack adds 20 new slime styles, but first you’ve got find them scattered around the world.

Viktor’s Experimental Update and the DLC are both available now.

The Overwatch Baptiste Challenge puts a new skin, icon, and sprays up for grabs